In The Spotlight - A Wedding on the Riviera by Evonne Wareham 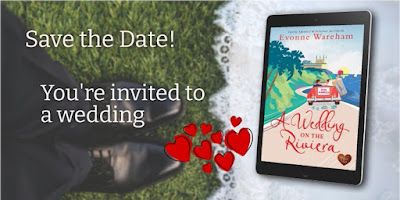 A return to the Riviera on the trail of a runaway groom … When out-of-work actor Ryan Calder attends a wedding as the plus-one of successful businesswoman, Nadine Wells, he doesn’t expect to get in a scuffle with the groom.

But Ryan has a good reason. He recognises the groom from another wedding where the same man made a quick getaway, taking the wedding money and leaving a heartbroken bride in his wake. It seems he’s struck again, and Nadine’s poor friend is the target.

Ryan and Nadine decide they can’t let it happen to another woman, so with a group of friends they hatch a plan that will take them to the French Riviera, hot on the heels of the crooked groom. But could their scheme to bring him to justice also succeed in bringing them closer together? This story had me gripped from the very beginning! It is a real page turner….. I just had to find out what was going to happen. I read this as a stand-alone which worked really well, but of course I now can’t wait to go back and read Summer in San Remo.

Nadine is a perfect lead character, I couldn’t help but the want the best for her and Ryan is the perfect leading man and don’t we all want a Ryan in our lives?

There is so much I could say about this story as I just loved it, but I don't like spoilers so I will say that this is the perfect escapism!

Evonne Wareham was born in South Wales and spent her childhood there. After university she migrated to London, where she worked in local government, scribbled novels in her spare time and went to the theatre a lot. Now she’s back in Wales, living by the sea, writing and studying a PHD in history. She still loves the theatre, likes staying in hotels and enjoys the company of other authors through her membership of the Romantic Novelists’ Association. 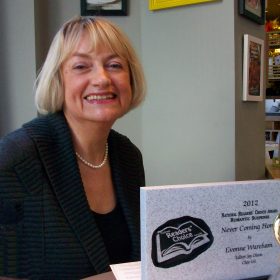 You can follow Evonne on Twitter @evonnewareham
Keep up to date with Choc Lit @ChocLitUk
& buy your copy here!
Labels: Book Reviews In The Spotlight 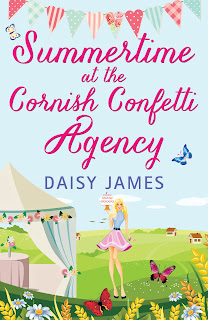 A Cottage by the Sea - Carole Matthews

Katie
Hello! First of all thank you for taking the time to visit by blog. A bit more about me? Well the most important job I have is being Mum to a wonderful 8 year old daughter, she really is my best friend! & I am sure she will pop up through this blog! I am very lucky as I have a wonderful fiance and really am just loving family life. Last but not least...and I am sure you have already guessed by now. I love reading! looking forward to talking to you all. Lots of love K xx